Diane Ackerman's treatment of the subject of the language (and lack thereof) that surrounds "A Natural History of the Senses" was enjoyable to read. I particularly appreciated how she picked out how we must rely on similies to ever describe smell. She gives the example "In The Place in Flowers Where Pollen Rests, novelist Paul West writes that “blood smells like dust.” An arresting metaphor, one that relies on indirection, as metaphors of smell almost always do." (8) She even describes one scent through the imagery of taste, "I can taste something thick and amber, like butterscotch, on the back of my tongue. It has a thin vinyl covering to it and a fizzy muskiness seems to be coming up all around it in a halo. It smells deeply luscious." (53) Wine connoisseurs, like my parents, use an established language amongst their community, saying that a wine tastes "oaky" or "heavy" or "strong", language that could just as easily be used to describe a tree or a burly man. Oftentimes to understand how important vision is, someone might ask you to describe what a color looks like. We can either find examples of things that are also that color, blue sky, green grass, red apple, or we can use the scientific wavelengths, but neither have gotten a blind person any closer to understanding the color. Describing a musical to a truly deaf person would be just as difficult, though many in the deaf community particularly enjoy music as they feel rather than hear the vibrations. To someone paralyzed or numb, what does soft skin or a scratchy beard feel like if you have nothing to compare it to? Knowing that our understanding of the world around us falls apart without an established memory to create an analogy, the questions it raises are numerous. Does racism stem from our evolutionary past of distinguishing light=good, nutrition, dark=unknown? Perhaps that is why the vampire culture is so fascinating to us, particularly now in an age after banning segregation (though racism pervades), because vampires up-end our traditional dichotomy of light and dark, (they sleep during the day and their flesh is burned by sunlight). There was so much more fascinating material to Ackerman's book (her obsession with relating the senses back to sex, though mainly excluding anything other than heteronormative sexual acts). I am really fascinated by the treatment of relating the senses to the brain waves as we still grasp to understand its relationship. An ongoing tool I have been using is the Mindflex Hack which captures data from brainwaves using an electroencephalography sensor. While my projects so far have dealt with meditation and chakras, I would be interested to conduct more research on brainwaves and the senses by introducing new smells, or new textures or something in that vein.
Posted by MLE at 12:45 PM 1 comment:

As I mentioned in my email, my first attempt at this experiment perhaps relied too heavily on the Tarot reading; I was forcing the square pegs in the round hole and, as you could have guessed, no aura emerged. I went back to my notes from last class and recalled this visual I got of a new search interface; instead of searching based on tags provided by users uploading the content, wouldn't it be cool if the metadata saved from each image captured via ubiquitous technologies (ie. Smartphones) could identify the location at which you took the image? Then, via an uploading photograph sharing site like Flickr, you could identify other photographs taken by other people in the near vicinity. This could have positive or negative effects on Tourism, but as Ulmer stated, we want to share with people what they need to know about Alachua County. It's one thing to read about Gainesville, (literacy, institution of school, True/False), and quite another to see the images (electracy, institution of internet, Pleasure, Pain).

As I was re-collecting for my second attempt, taking one step back from the heavy reliance on the Tarot, I finally noticed what so many of my images had in common: visual texts or signs. Oftentimes, the signs were left as messages for people of the future to read. This is a way our consciousness can time travel: I scribble a note on a bathroom wall, or an old wooden classroom desk, or I create a meme to be sent out through the institution of the internet, and someone I will never meet will read what I left behind. "Warning," "No Trespassing," "You poisoned Xanadu, you ass!" "Life is a box and we are all going to die," "Keep calm and call Batman," and "Life is a mystery worth the terror and uncertainty." Some of the messages refer to our embodied pleasure/pain scale, but others tap into our untouchable "feeling" of limit. I did not add any captions to the images because the literacy relics ie. warning signs, graffitied desk and graffitied bus, have been subsumed into the imagery in my electrate experiment. The only bits of text are nods to the books we read throughout the semester in the Related Searches field and final words from my tutor William Blake on embodiment, pleasure and vices. I set the tone with the background music, the score to Psycho (my film to be represented). Overall, I am very pleased with the outcome.

http://prezi.com/qulmf2mzghtj/konsult-machine/
Posted by MLE at 9:38 PM No comments:

My newest Tarot Reading William Blake Tarot reading for me
As Dhanashree said, super uncanny how familiar and appropriate it seemed. 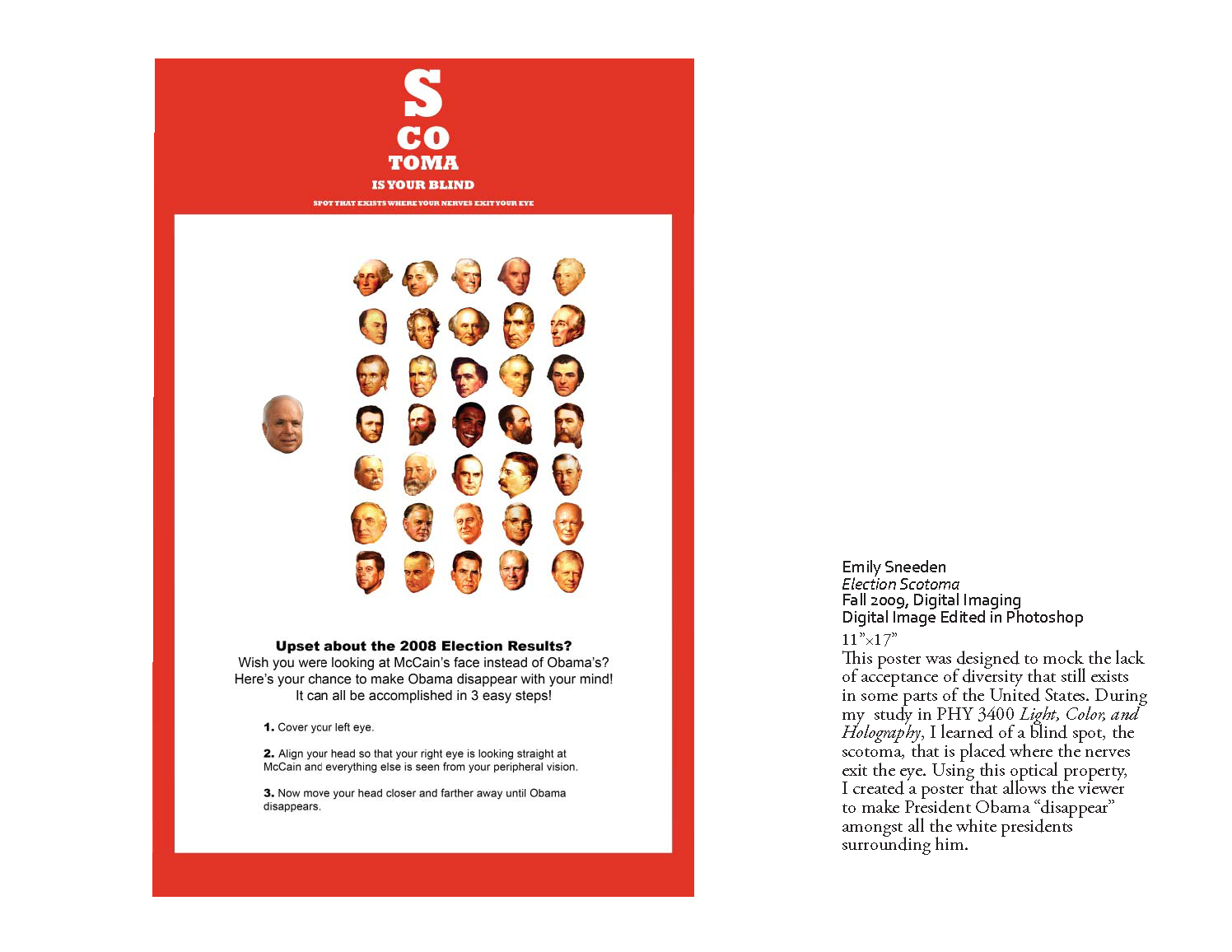 As I mentioned in my email to the class, I did a project sophomore year on the existence of blind spots where the optic nerve exits the retina. The reason we don't see our huge blind spots is because of our binocular vision. I've always enjoyed optical illusions and tricks and I think this one is particularly cool. Ackerman's interesting look into the senses and especially exploring how our embodiment is flawed, (synesthesia, anosmia, etc.) is particularly apt to this experiment. As Reynolds points out of Smithson's work on p. 160,  “All of these visual convergences depend on memory to fill in these perceptual gaps or blind spots, a holding in the mind of the image of an object as it appeared from a previous position, either in the air or on the ground, while experiencing the same object from a new or different position.” (160) Binocular vision is especially interesting in our study of ubimage, where cameras act as our singular vision tools, in ways both more advanced and more primitive than our own eyes. We often can take a picture and be disappointed that it cannot capture everything that our eyes can see. But a camera has no blind spot. It will reveal everything. Reynolds goes on to say, "Smithson was fond of creating ‘enantiomorphic situations’ to reveal the blind spots embedded within a number of descriptive models of perception...[which] disrupt facile relationships between thought and perception, and ... open up gaps in or reveal limitations to mental and perceptual experiences of time and space.” (196). Blind spot is such a strong metaphor that we can adapt for our purposes because being or becoming blind is terrifying for someone with sight. After all, according to Ackerman, "Seventy percent of the body's sense receptors cluster in the eyes."


http://en.wikipedia.org/wiki/Scotoma
Posted by MLE at 7:43 AM No comments:

These are more photos taken with my phone on my walk to class. I think their mood is evocative of the atoxiclypse. I believe these will fit in well with the aura of the Tarot as Tarot cards are not meant to tell the future but to show possibilities and encourage action. 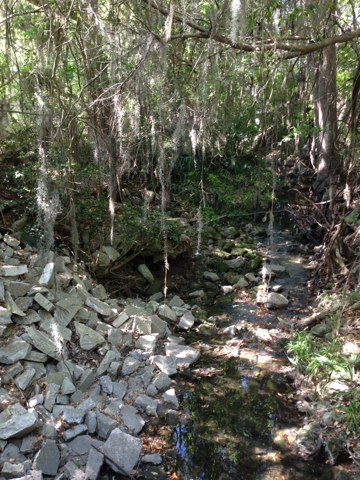 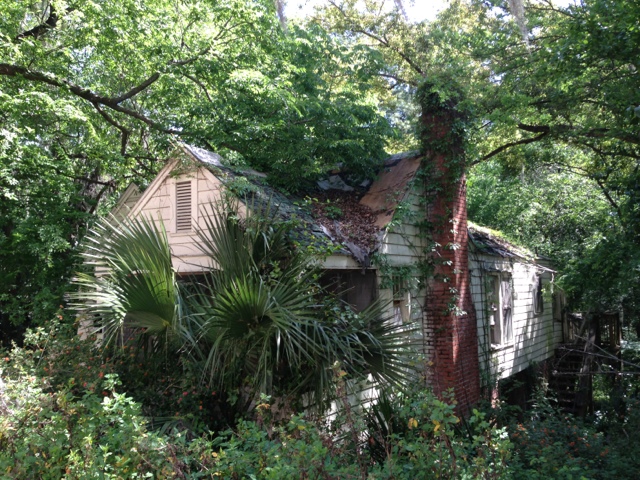